To report dumping, leaking, spills or other polluting sources in California coastal waters, please call or text us at
805-458-4606

Dangers to Ocean Ecosystems
What does climate change actually mean for the ocean? Why is it important? Covering most of our planet, the world's oceans are the most important factor in Earth's climate. Even small changes to the alkalinity of ocean water has drastic effects on marine life that follow throughout all sea life up the food chain. Increased acidity of seawater also makes it difficult for marine animals to grow and maintain shells and skeletal structures. (Read more)

Ocean Degradation Is Worsening
We all contribute to ocean degradation. We have abused the ocean, treating it as an endless waste dump, adding more toxic chemicals, plastics and contaminants every year. Marine Watchdogs' ongoing studies will help determine sources of contamination and provide a guide for followup, legislation and remediation. 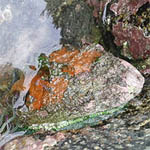 Abalone is a common name for any of a group of small to very large marine gastropod molluscs in the family Haliotidae... marine snails. Abalones are consumed raw or cooked in various cultures. Rapid overharvesting since the 1970s resulted in white abalones becoming the first marine invertebrate listed as endangered on the Endangered Species Act in 2001. A 2010 assessment stated that white abalone has declined 78 percent in the last ten years, effectively making them reproductively extinct in the wild.
(Read more) 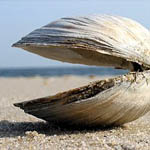 Clam is a common name for several kinds of bivalve molluscs. The word is often applied only to those that are edible and live as infauna, spending most of their lives halfway buried in the sand of the seafloor or riverbeds. Some have life cycles of only one year, while some clams can live hundreds of years. Lots of sea animals eat clams including birds, seals, octopuses, walruses and sea lions, but they're also a target for recreational and commercial fishers. In Pismo Beach, once famous for its abundant clams, there has been a decades-long population decline, and almost all clams found are too small to harvest. Clams are particularly susceptible to pH changes and, as concentrators of toxins, they are an indicator of water contamination.
(Read more) 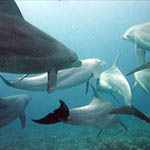 We're concerned about the mass slaughter of dolphins, and the overfishing of dolphins in general. Like sharks, dolphins are important predators, eating mostly fish and scquid. Dolphins are generally not hunted near California, but in other areas of the Pacific, dolphins are killed both deliberately and accidentally with net fishing and forced beaching. Some dolphin species are at risk of extinction or seriously endangered. (Also, contaminants like pesticides and heavy metals that do not disintegrate rapidly in the environment concentrate in large marine animals like dolphins; dolphin meat is therefore often high in mercury and may pose a danger to humans when consumed.)
(Read more) 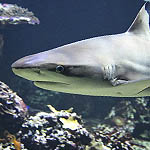 Why worry about sharks? Over 70% of sharks worldwide have been killed by fishing, with an estimated 100 million more killed every year. Shark finning is a particularly difficult problem in Asian countries where shark fin soup is a status symbol and is erroneously considered healthy and full of nutrients. Scientific research has revealed, however, that high concentrations of BMAA, a neurotoxin, are present in shark fins, potentially posing a health risk to people who eat it. The US FDA lists sharks as one of four fish (with swordfish, king mackerel, and tilefish) with high mercury content that is especially dangerous to children and pregnant women.
(Read more) 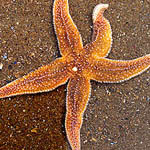 Starfish along the California coast, also known as sea stars or asteroids (due to being in the class Asteroidea), are star-shaped marine animals. They're important to the Pacific ecosystem because they prey on mussels, keeping the population in balance. (More) Sea stars along much of the North American Pacific coast experienced a massive die-off in 2013/14 due to a mysterious disease called sea star wasting syndrome, which has persisted at low levels in most areas and continues to kill sea stars.
(Read More)

What do you think?